When it comes to apps used for meetings, we assume most of you use Zoom, Slack or Microsoft Teams. While we agree that Zoom isn’t exactly in the same league as Slack or Team, we think there is some overlap, and not just a little.

Zoom may be the leader of the trio, but looking at downloads over the past few years, it looks like the lead will narrow in 2023. And for the first time in the history of the app.

Looking back at the trio’s downloads, it’s hard not to marvel at the app’s massive downloads, which it’s estimated ended up making its way to almost one billion cellular devices, since the beginning of 2020. 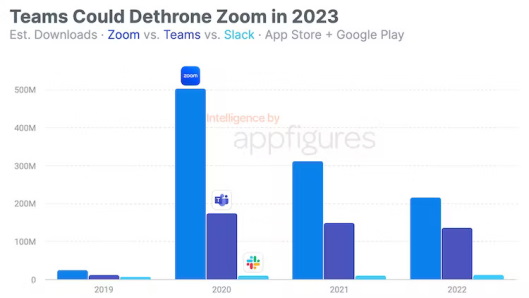 Downloads of the Zoom app had been on the decline since the start of 2020, but looking at the stats, it remains ahead of the pack compared to its other two rivals.

At the other end of the ranking, we find Slack, which has seen progress over the past year. But that wasn’t enough to match the growth seen with Zoom and Microsoft Teams.

Coming to Microsoft Teams, the situation was very different from that of the other two. We saw a very consistent performance here, which is not the case with Zoom.

It’s clear that Zoom will run into a problem called Teams in this new year, and it will have to play its cards smart to avoid being dethroned from the top spot.

Also, unlike Slack, Teams downloads aren’t too far off from Zoom’s. In 2022, Zoom recorded nearly 216 million downloads, compared to 137 million for Teams. But the rate of decline of this app is definitely alarming. At the end of 2023, it is quite possible that the persistence of Microsoft Teams will be superior to that of Zoom. And there’s no other major competitor yet that could prevent that.

So, watch out for 2023, because it could be Microsoft Teams’ year of victory. Until then, we’ll just have to wait and watch patiently.

What do you think of the conclusions of this report?

What collaboration tool do you use in your business?