Microsoft unveils a new concept in the field of video games: a singing Xbox controller ! The latter allows you to play while listening to a song. It is possible to win it by participating in the contest set up on Twitter. To your smartphones!

The American computer multinational unveils a new original video game controller. A priori, nothing distinguishes it from the others next generation xbox controllers. The design, the compatibility… It includes all the features expected from the latest Microsoft products. And it even does much more, since it allows its owners, for the first time, to listen to a song directly from the object in question. All you have to do is press one of its buttons. The title of the artists then gets started thanks to the loudspeakers which are at the back.

But what sound can emanate from it? This is the new single from Benny Blanco, one of the members of South Korean boy band BTS, and Snoop Dogg. It’s called “bad decisions”. And this does not go unnoticed since his name is written in white, right in the middle of the new red controller. With this new concept, Microsoft is thus acting as a precursor in the field of singing controllers…

Note however that it is not possible to obtain such an object in supermarkets. Note also that she is limited edition. And to hope to possess it, it is necessary to participate in a competition that the brand puts in place for this purpose. You have to go to the Twitter application, follow the account Xbox and retweet the post that mentions the controller. You must of course accompany your retweet with the following hashtag: #BadDecisionsSongXboxSweepstakes. Of course, you must be of legal age to have the chance to participate in this competition.

If you are both a fan of gaming and music, it’s a safe bet that this new controller is made for you! You have until August 25, 2022 to try your luck and win this collectible. 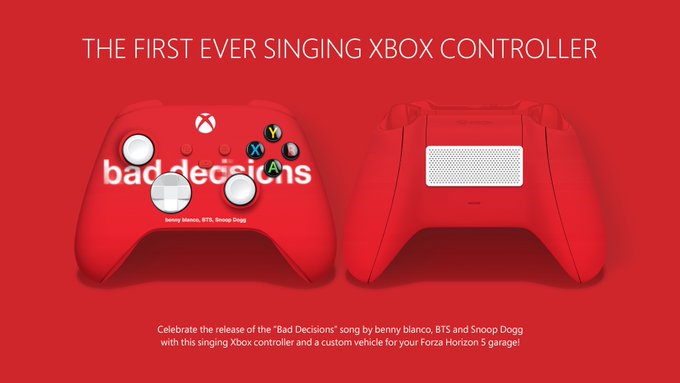