Microsoft is said to have laid off its team focused on winning over mainstream consumers. In 2018, the major brand initially detailed its efforts to win over the non-business customers it abandoned, forming a Modern Life Experiences team to focus on professional consumers (prosumers). Business Insider is now reporting that Microsoft is laying off that team and offering the roughly 200 affected employees the option of finding another position with the company or accepting severance pay.

The English term prosumer is a portmanteau double word which is used either to designate a consumer-producer (Producer + Consum up) or a professional consumer (Professional + Consumer). The use of the term prosumer has somewhat fallen into disuse, but we can consider that we partially find this notion through that of expert consumer or client. It should be noted that the notion of prosumer (professional consumer) does not normally refer specifically to the buyer or the customer in B2B environments. The term used in France is prosumer.

In 2015, Microsoft acquired Mobile Data Labs, creator of the popular MileIQ app. The Mobile Data Labs team continued to develop and deliver mobile productivity solutions, including versions 1.0 of the Family Safety apps for iOS and Android. In 2017, this team was called Modern Life Experiences (MLX) and was involved in the research and development of customer-focused projects, including Money in Excel. In 2021, MileIQ spun off as MileIQ LLC and Microsoft removed MileIQ benefits from its subscription offerings.

The company briefly told the story in a blog post published in April 2021:

Sent by Microsoft
In 2015, Max Wheeler’s life was Mobile Data Labs, working on an app that provided stress-free mileage reports for commercial drivers and the companies that employed them. That’s when Microsoft, citing ambitions to reinvent productivity and business processes in a mobile- and cloud-centric world, acquired the San Francisco-based company.

After a few years of tweaking the app at Microsoft, Wheeler and the team learned that the Family Safety team, which lets parents use screen time limits and other features to monitor and protect loved ones online, needed a mobile solution. As a family-minded group of people, the team jumped at the chance. The team previously responsible for tracking miles has offered its growth mindset and human-centric design talents to create 1.0 versions of the Family Safety apps for iOS and Android.

Almost two years later, the team is called Modern Life Experiences (MLX) and has made a name for itself by researching and developing client-focused projects. We recently sat down with Wheeler to discuss the journey, which reminds us that adaptability can lead anywhere, that human-centric design never goes out of fashion, and that empathy impacts the experience.

According to a Business Insider report, Microsoft is apparently laying off members of the Modern Life Experiences team. The report indicates that approximately 200 employees will be affected by this decision. However, they have the option of looking for other vacancies within the company or taking severance pay within 60 days.

This should come as no surprise to anyone following Microsoft, as most products coming from the MLX team have not been well received by customers. As already mentioned earlier in the article, MileIQ is no longer part of Microsoft. Microsoft recently announced that Money in Excel will no longer be supported starting June 30, 2023. Once support ends on June 30, 2023, you will no longer be able to connect a new financial account or reconnect an existing financial account.

Sent by Microsoft Support
Why are you removing Money in Excel from Microsoft 365 Personal and Family subscriptions?

We have learned a lot from Money in Excel and appreciate the many needs people have for their families and their money. We believe there are other areas where we can have a greater impact and we will focus on those moving forward.

Will I still receive new transactions?

No, once Money in Excel ends on June 30, 2023, you will no longer receive transaction updates or new transactions.

How can I turn off recurring billing?

Can I keep a copy of my data?

Yes, your data belongs to you and is all contained in your Excel workbook. Please keep your workbook in a safe place, as you will not be able to restore your data after Money in Excel ends on June 30, 2023.

After Money in Excel ends on June 30, 2023, Microsoft will no longer have access to your data. If your Money in Excel workbook is stored on your OneDrive, it’s safe, we won’t delete any of your personal files.

Family Safety is the only active product being developed by the MLX team. We do not know whether or not these layoffs will affect the development of the Family Safety product.

Additionally, while Microsoft hasn’t provided an official comment on the end of its Modern Life initiative, Erynn Hesler, a senior designer at Microsoft revealed that there is some tough news for the Modern Life Experiences team this week. in an article published on LinkedIn. all my colleagues who had to deal with difficult news today, please let me know if there is anything i can do. The culture we created within a giant company within our small Modern Life Experiences team was so special. I think all of you today, explained Erynn. . 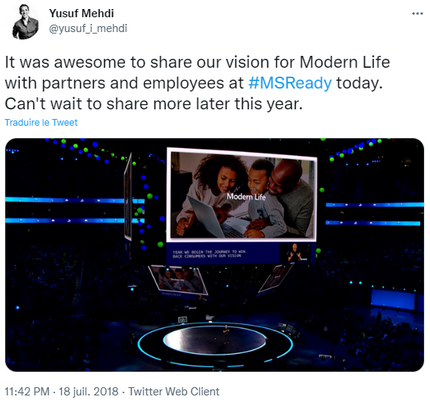 The news comes weeks after Microsoft cut less than 1% of its 180,000 employees, with job cuts in consulting and customer and partner solutions. Microsoft has also reduced vacancies as it slows hiring amid a weak economy.

Microsoft’s consumer efforts now focus on Windows, Microsoft 365, Microsoft Teams for consumers, Surface and of course Xbox. Microsoft originally formed the Modern Life Experiences team in 2018 after a difficult period for its consumer services. Microsoft killed its Groove Music service in 2017, officially discontinued Kinect the same year, and finally admitted Windows Phone was dead. The Microsoft Band fitness device also disappeared in 2016, and efforts with Cortana fell far behind rivals to the point that Microsoft changed things to focus on business users instead. Microsoft has even pivoted its HoloLens hardware to commercial customers, and there are new signs that HoloLens might be in trouble.

All eyes will now be on the results of Microsoft’s hiring of former Uber product manager Manik Gupta last year. Gupta is responsible for the Microsoft Teams consumer, Skype and GroupMe, and he is focused on building customer experiences across Microsoft.

Microsoft had been trying to acquire popular communities over the past two years, including TikTok, Pinterest, and Discord, to improve its efforts with non-business users. Outside of Xbox, Microsoft doesn’t have a community or social service widely used by consumers, and TikTok, Pinterest, or Discord could have filled that gap. Rivals like Google, Amazon, Facebook have all acquired big consumer apps like YouTube, Twitch and Instagram, and Microsoft is still trying to match its consumer offerings.

Have you ever heard of the Modern Life Experiences team?

What do you think of the target assigned to him?

Would Microsoft benefit from having a community or social service widely used by the general public, like its rivals who have acquired consumer applications? To what extent?

Tesla lays off hundreds of Autopilot workers as part of workforce reduction, CEO Musk says 10% of salaried workers will lose their jobs

Coinbase is laying off 1,100 employees, or 18% of its workforce, as executives prepare for a crypto winter. CEO Brian Armstrong admits the company grew too quickly