Official Xbox One sales have been largely a mystery, but now Microsoft is finally admitting the obvious: PS4 sales have far exceeded those of the Xbox One.

Microsoft stopped releasing its Xbox One sales numbers at the start of its 2016 fiscal year, instead focusing on Xbox Live numbers. The change meant we never officially knew how well the Xbox One stood up to the onslaught of the PS4 after the Xbox One’s rocky launch. Analyst estimates have consistently placed Microsoft in third place behind Sony and Nintendo. This time around, documents submitted to Brazil’s national competition regulator have finally shed some light on how sales of the Xbox One generation have gone.

A highly publicized case is underway in Brazil, as Microsoft tries to defend its acquisition of Activision Blizzard with CADE, the Brazilian competition authority. Official court documents have revealed a lot of juicy details so far. Microsoft’s latest court documents confirmed that Sony sold more than twice as many PlayStation 4s as Microsoft sold Xbox Ones.

For the record, the Xbox One is an eighth generation video game console developed by Microsoft. Unveiled on May 21, 2013, it succeeds Xbox 360 and competes head-on with Sony’s PlayStation 4, and more indirectly with Wii U and then Nintendo’s Switch. Equipped with an AMD processor, the machine is equipped with a Blu-ray or Ultra HD Blu-ray player and a 500 GB, 1 TB or 2 TB non-removable hard disk depending on the model, aiming to make it a system integrated entertainment. Integration of the Kinect device allows the console to respond to voice commands or user-dictated movements and be combined with video conferencing functionality. Kinect is quickly forgotten by the general public and is offered as an option, which lowers the price of the console and many buyers choose to buy the console without Kinect for the lower price.

Microsoft refuses to release information on console sales since 2015, saying it’s not the key measure of success they like to focus on. Microsoft prefers to focus on engagement, a key factor in creating Xbox Game Pass. The reluctance to release sales figures has never stopped trade analysts from offering accurate sales estimates. Data from Ampere Analysis predicted 51 million sales of the Xbox One line of consoles in 2020, and it looks like they were right.

The information can be found on page 18 of Microsoft’s court documents dated August 9, 2022. The translated line reads: Sony has overtaken Microsoft in console sales and install base, having sold more than twice more [que] Xbox in the last generation, from a rough translation by Google.

Sony recently released its latest PS4 sales figures, confirming 117.2 million sales of the console line, making it the second biggest home console of all time. Although Microsoft didn’t provide concrete sales figures for the Xbox One, its admission means the company must have sold less than around 58.5 million units. This lines up with market research from Ampere Analysis in 2020, which put the Xbox One install base at 51 million units at the end of Q2 2020. Nintendo Switch currently sits at 111.08 million lifetime sales, and should pass the PS4 later this year.

According to data from Ampere Analysis, at the end of the second quarter of 2020, the installed base of PS4 (all versions) was 111 million, Xbox One (all versions) 51 million and Nintendo Switch (all versions) 57 million. Sony has built a formidable global brand in PlayStation over the past 25 years. While Microsoft will be more competitive in the next cycle, especially in the key battleground of continental Europe where the company lost ground during the Xbox One cycle, the PlayStation brand still resonates more strongly than Xbox outside of markets. American and British where the situation is more balanced.

Ampere Analysis also touched on the strategies around the latest console generations from the two rivals:

Sent by Ampere Analysis
Sony is following the same strategy that made it so successful with the PS4 generation. It centers its strategy around games and exclusives built specifically for the new platform, and enables those games to make full use of the latest technologies included in the PS5.

While Microsoft is playing the long game and backing away from the traditional product strategy of releasing exclusives for a new console (likely until at least the end of 2021), Sony has an open target with the launch of the PS5. It has rightly identified this as a key competitive force and should drive the message of games designed specifically for the PS5 platform strongly in the run-up to launch. In the context of selling next-gen consoles, this factor clearly gives Sony a substantial advantage, although Microsoft would argue that its approach is more consumer-friendly, focused on the gamer and keeping its audience engaged. . 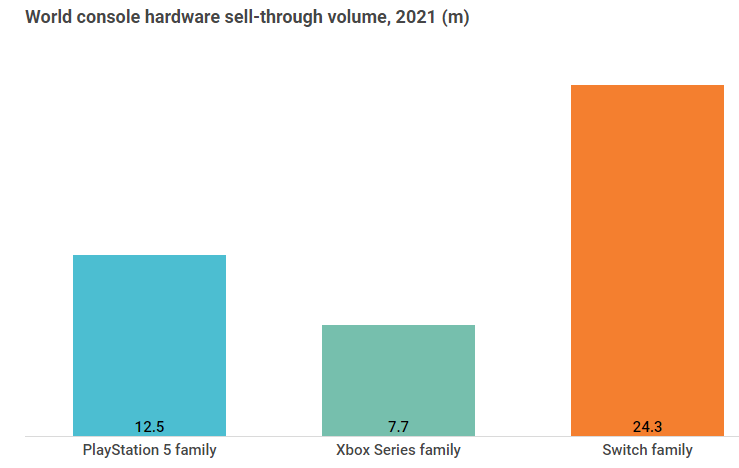 Sent by Ampere Analysis
The monumental effort to overcome supply chain challenges during the first full year of the PS5 life cycle hit a brick wall in the last two months of 2021. Weaker-than-expected sales , particularly in December, means that the PS5’s sales performance has lagged behind the previous generation, PS4. This course is unlikely to be corrected until at least later in 2022, but more likely in 2023, and will depend on what is an unpredictable component supply chain environment.

While Sony will be relatively happy with its performance compared to its nearest competitor, it will be aware that performance in the console market is highly dependent on sales momentum. Anything that undermines this lan is not welcome.

Microsoft ended 2021 with its family of Xbox Series devices reaching cumulative sales of 10.5 million units. It’s on par with the Xbox One cycle of the previous generation. Similar to Sony with the PS5, Microsoft suffered significant shortages on its high-end X-series device, undermining its potential in the market to some extent. Microsoft has also used X-series components to upgrade its cloud game servers, putting additional pressure on consumer availability of its flagship console.

Microsoft was able to partially alleviate the Series X shortages through its dual product strategy. The cheaper and less powerful Xbox Series S has seen much better uptime and, alongside Xbox Game Pass, has driven unprecedented adoption of this digital-only device. Amper estimates that cumulative sales for the S-Series exceeded the X-Series at the end of 2021.

The Xbox One may not have sold well, but Microsoft’s work on the Xbox One generation laid an important foundation for the Xbox Series S/X. Microsoft moved to Xbox Series X with 1440p support, variable refresh rate (VRR) and many 120Hz games all at launch thanks to testing of these features on previous Xbox One consoles.

are you more Xbox or Playstation? Why ?

What could push you towards a competing console?

are you surprised by the figures communicated by Microsoft?

Microsoft to Acquire Activision Blizzard for $68.7 Billion and Become the World’s Third-Largest Gaming Company by Revenue

PS4 vs Xbox One: Sony sold twice as many consoles as Microsoft, according to Electronic Arts figures