At the very moment of the relief of the British contingent in Estonia, information from the Times mentions a possible departure of these forces and their return to the United Kingdom.

On September 21, the relief took place at Tapa in Estonia between the Royal Welsh Battlegroup (spearhead of the NATO Enhanced Forward Presence in the Baltic State) and the King’s Royal Hussars (KRH) equipped with two tank squadrons Challenger 2 and reinforced by an anti-tank company of the 1st Battalion, the Scots Guards. This unit is equipped with MRAP Mastiff and missiles Javelin.

The British contingent is reinforced by Danes with a squadron of tanks Leopard 2A7 and a French company from the 27th BIM.

According to the Times, the British army can no longer provide such a presence. His withdrawal could take place in December, the date of the next replacement. London could decide to withdraw its troops and base them in the UK, ready to be deployed in the event of a crisis. The deterioration of British finances could also be an aggravating factor.

Such a decision would go completely against the recent announcements of the British who wanted to extend their presence and increase their manpower assigned to Estonia so as to be able to deploy 2,000 men. But the MoD now says that the project was good to have 2,000 soldiers for Estonia and not in Estonia, and that it was a “temporary deployment”. 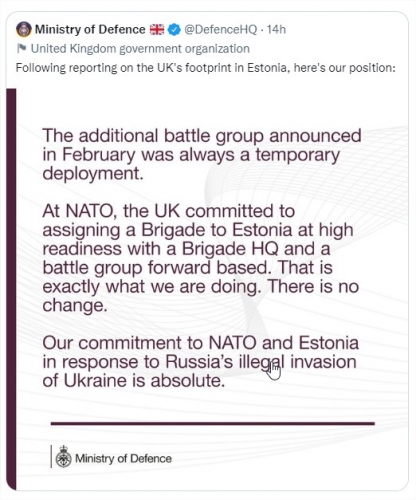 The Estonians reacted immediately. Here is their press release:
Commenting on the news today concerning the troops from the United Kingdom in Estonia, Estonian Minister of Defense Hanno Pevkur said that it is important to emphasize that the Allied presence in Estonia is constant. The UK and Estonia are in the process of developing a long-term solution and putting in place the details of implementing the Madrid Summit decisions. „At the last NATO summit, the allies took a clear position – the eastern flank of NATO, including the defense of Estonia, will be strengthened. First and foremost, that means the assignment of an additional brigade from the UK to Estonia, creating a division-level structure based on Estonian and British brigades, and the renewal of NATO’s regional plans, which also include the plans for defending Estonia,“ said Pevkur. According to the minister, Estonia’s objective is to increase the footprint of the allies in Estonia. „Today, the British-led main contingent in Tapa will remain. It includes ca 900 men and heavy equipment. French and Danish units are also here, with the latter having arrived this month with a new unit and Leopard tanks. At the Ämari Air Base, the Baltic Air Policing mission will continue, and the rotation there was just recently assumed by the Germans. So we can say already now that there has never been as much allied firepower in Estonia as there is now,” said minister Pevkur. „Of course, understandably our interest is in increasing the footprint of the allies even faster, which is why in addition to the bigger NATO plans, we are also holding bilateral talks with various allies, so the Estonian people can rest assured, knowing that Estonia is defended,“ added Pevkur.”

“Constant NATO presence”, reassures the Estonian Defense Minister who also highlights the search for a long-term Anglo-Estonian solution with a British brigade (he does not say where it will be based) and a force of the level divisional with national and allied elements. The Estonian minister cites the figure of 900 British soldiers on Estonian soil “to reassure the Estonian population”.